Call us for aquaponics fish

Your guide to aquaponics fish

Aquaponics is really pretty simple. Just convert the ammonia produced by few fish into nitrate that promotes the growth of stems and leaves in plants. Unfortunately, there's a lot of "hows" and "whys" built into that description and for years the only people providing answers were social media personalities and other armchair biologists with nothing more to go on beyond what they learned from others like themselves. If enough people repeat the same information again and again, it becomes defacto whether it's right or not.

The purpose of this guide to aquaponics fish is to educate you, unfortunately it's difficult to educate someone when they have already been taught by someone else. It's human nature to believe the first understanding on any subject and every subsequent teacher must first disprove the student's prior knowledge before a new lesson can be taught. In some cases, the level of reinforcement from the most vocal and argumentative forum posters or YouTubers might render the student nearly impossible to teach.

With that in mind, we are going to explain why certain aquaponics fish are better than others. As simple as that seems, there's a lot of potential for argument. So before we do that, we are going to go over a few of the most common misrepresentations concerning aquaponics to help you better understand how we formulated our recommendations. We are also going to set the record straight about what we feel aquaponics is best suited. So without further ado, here is your guide to aquaponics fish. Please read it with an open mind.

First a little dose of reality 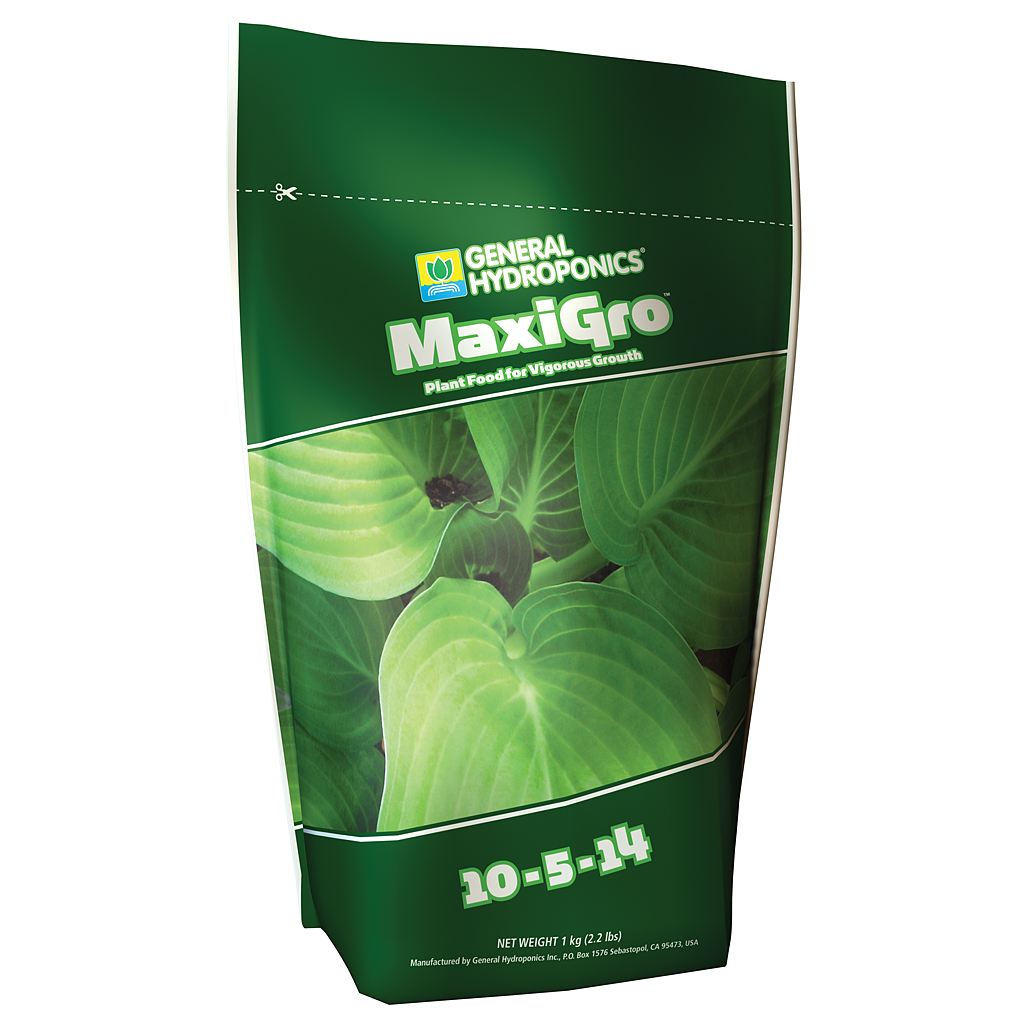 Take a look at this package of Maxi Gro by General Hydroponics. One 2.2 pound bag provides enough nutrients for 100 gallons of water and keeps feeding the plants for an entire year of harvests. One hundred gallons fills one of our four by eight foot, 72 plant, floating raft beds and depending on what we put in the beds, we can harvest anywhere from six to nine times during a single growing season without adding any additional nutrients. We sell this bag of MaxiGro in our retail store for $16 and online for even less.

Now just to be clear, we're not trying to sell you anything here. In fact, we are probably doing more damage to our sales by speaking the truth. After all, we are a fish hatchery and we do hope that you'll buy your aquaponics fish here rather than somewhere else. But all that aside, we aren't going to pump out sunshine just avoid the darker truths either. So in the spirit of our founding principles to teach first and sell later, here are some inconvenient facts about aquaponics and aquaponics fish that you won't read anywhere else.

Almost nothing in aquaponics makes us more agitated than when people breeze over catch phrases without explaining the full ramifications of what they are saying. Take the statement that "aquaponics is a balance..." insert what you want after the word "balance". The truth is that this so-called "balance" is neither optimal for the plants or for the fish. At every point in the system the fish and the plants are being dealt compromises that are hurting their potential growth.

Having said that, many aquaponics fish are extremely resilient and will adapt to whatever conditions in which they find themselves. To the non-biologist, they might even appear to be doing great, but the truth is that fish need some very specific conditions to grow at their optimal rate and aquaponics fish are certainly not getting what they need. To be clear, they do grow and some even grow fast, but not as big or as fast as they would have in an optimal environment. The same can be said for the plants.

There is no doubt that the plants in an aquaponic system grow at an accelerated rate. However, as fast as this growth is, it's nothing compared to a hydroponics (without fish) system with precision measured nutrients. The issue has to do with the level of nutrients that the fish in an aquaponics system can safely tolerate. So if the goal is to produce as many pounds of vegetables as possible, in a side by side comparison, a straight hydroponics system will run circles around a properly "balanced" aquaponics system.

There is no apocalypse coming

One of the worst things that has happened in aquaponics is the Internet marketing of fear. Almost every aquaponic website has a blurb about the need for aquaponics because of the eventual end of society as we know it. It's another religion and retailers are saying whatever is necessary to save people from doom. Logic and scientific evidence have no place in their church. Everyone is asked to believe that the end is near and nobody will be able to buy any more of the precious MaxiGro.

Over the last few years, especially since YouTube was founded in 2005, the Internet has been slowly filling up with personal opinion and special interest being disguised as fact. Many of the top retailers of aquaponics systems have jumped on this marketing bandwagon, some of which could even be characterized as "fake news". Some pepper their sales pitches with a few scientific facts to make the whole presentation seem legitimate, but in the end it all comes down to one simple fact. You can build a hydroponic system for less than $100 in materials and $16 worth of nutrient solution per bed to feed as many people as you want, come hell or high water. If you're afraid of the planet running out of MaxiGro, just buy enough to last 100 years and it will still be cheaper than most of the retail aquaponics systems being sold today.

Waste not want not

The notion that fish waste is what drives an aquaponics system is how the industry copes with the most inconvenient truth of all. The fact is, fish poop is utterly useless to plants. It's sewage and nothing more. This sewage can be converted into something semi-useful through a process known as mineralization, but the process is breezed over by retailers without much explanation. Why?

Well, for several reasons. First, the whole process of mineralization takes a long time. Second, mineralization requires that other life forms, such as worms and bacteria, digest the fish poop. Third, most people will never achieve mineralization before their water is so polluted with dissolved fish wastes that their system will crash due to the volume of oxygen being used by rampant bacteria in the water. And last but not least, the number of fish that can be raised in an aquaponics system must be reduced to well below the normal aquaculture stocking density to keep bacteria to a minimum and allow mineralization to be effective.

One industry "solution" is to add worms to your grow beds. This works in some systems, but not all. Another more obvious solution is to simply remove the poop using some sort of serviceable barrier type filter, but this violates the notion that aquaponics systems are "maintenance free" as claimed on some popular retailer websites.

The only fish waste that is effectively used is ammonia. More accurately, the nitrate that is eventually produced by the bacteria that feed on the ammonia. This nitrate forms the nitrogen component of the NPK values, also known as the fertilizer numbers representing nitrogen(N), phosphorus(P) and potassium(K). Going back up to our MaxiGro, the fertilizer numbers are 10-5-14. So the nitrogen content is 10 percent of the total weight. Ironically, the other components necessary for proper plant growth in an aquaponics system must be added to the water just like MaxiGro. Is it time to stockpile phosphorus and potassium before it's no longer available?... Just kidding.

You might think from reading the topics above that we're anti-aquaponics, but nothing could be further from the truth. That said, when manufacturers put their self-interests above reality and only preach the positives as if the negatives don't exist, or even worse, propagate a belief in doomsday to extract money from concerned customers, it causes people to fail miserably and lose a lot of money in the process. We are left with no choice but to sacrifice some of our own potential income in an effort to be a voice of reason and common sense. In the next section, we will counter balance the downsides by highlighting a few of the more positive aspects of aquaponics.

Now for the good stuff

One of the most significant challenges in aquaculture (fish farming) is the disposal of ammonia or nitrate heavy water. Nitrate is not absorbed into the soil, so if it manages to seep into underground aquifers, it will re-emerge as well water contaminants in the surrounding area. Nitrate contaminated water may cause health problems in humans, especially infants, but you can Google that stuff for yourself. The good news is that nitrate is readily absorbed by plant roots. Nitrogen is required by the leafy parts of all plants and nitrate fulfills that requirement nicely.

Setting up an aquaponics system with enough plants to absorb the amount of nitrate produced by the bacteria responsible for converting fish ammonia (specifically Nitrosomonas and Nitrobacter) is an excellent way to make aquaculture environmentally friendly.

Imagine someone sitting on the rim of The Grand Canyon and painting it on a canvas. It's not the most efficient way to take a picture and it might not even be the most accurate, but that's not the point. To the painter, it's the process that matters. It's enjoyable and relaxing. The same can be said about the aquaponic gardener. There's quite a bit of zen to the whole process and while it may not be the most efficient way of doing either, achieving an elegant balance can provide peace and tranquility.